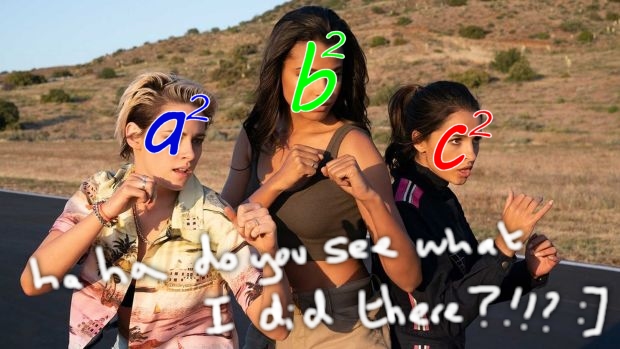 For a film named “Charles’ Angles” there sure wasn’t much trigonometry involved in the film I just saw, which was one named Charles’ Angles. In fact there was zero trigonometry in it at all. Nobody took A and squared it and then took B and squared it and then summed those together and took the square root of that to find C, not 👏 even 👏 once 👏. I felt pretty cheated. Not a hypotenuse in sight. It’s false advertising!

There is a Charles in the film though, specifically Charles Xavier from out of those X-Men lads, so maybe the “angles” refers to all the wrinkles on his old face, and his arthritic joints. I dunno, whatever.

Anyway this Charles fella, whatever his angles are, has three attractive female humans working for him as assassins and they’re all pretty angelic and seemed to be the main characters so I don’t know why they didn’t just name the film after them and make it less cryptic. Bizarre!

Talking of the film, here’s a detail for all my tech-aware friendos… and I hope you have a sick bucket on standby, because you may need one after you read this bit: multiple characters, multiple times, use a certain B-word entirely out of place, probably just because someone’s nephew told them it was a high tech word or something. Blo- 🤢… Blockch- 🤮… I can’t say it. But they do. Multiple times. Ugh.

If you like paying zero attention to the films you’re watching and having characters exposit every tiny detail just to make sure you don’t miss anything, A) what’s wrong with you, B) just don’t bother watching stuff in the first place, C) I mean come on, really, D) you’ll love this. It treats its audience like idiots – even bigger idiots than ones who might confuse “angels” with “angles”.

One or two scenes are genuinely great, and Kristen Stewart surprised me by being fantastic through most of it (even though she was in Twilight (multiple times!)!), but the rest of it is just quite blah. There’s a neat mid-credits sequence, where the cameos it would’ve been neat to see at some point during the film have been inexplicably stuffed.